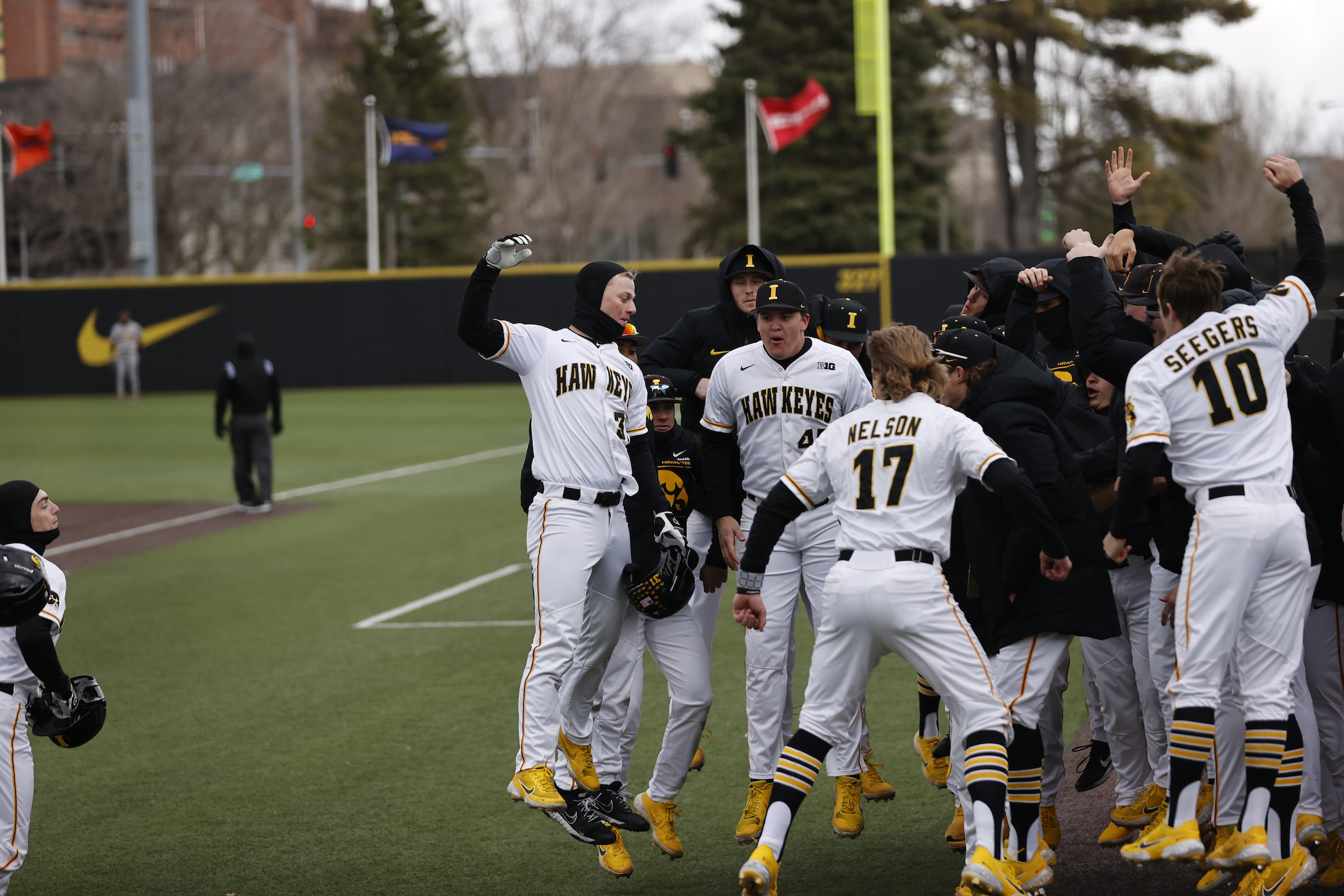 The final non-conference series of the season for the Iowa Hawkeye baseball team has officially kicked off and with a bang. Thanks to a late offensive push, the Hawkeyes were able to get passed the Chippewas by a 7-4 final. It was a contest that played out more like a football game with the weather which included strong winds and even slight snow flurries.

It was the type of contest Hawkeye fans have come to know as they grinded out the victory with the help of strong pitching and clutch hitting. In total, the Iowa offense produced nine hits, leaving just seven stranded on the base paths while on the other end of things, the Hawkeyes five-hit the Chippewas and forced nine batters to remain stranded on the base paths. The clutch part of Iowa’s offensive performance was all over the board and helped fans feel at ease despite the loss of a three-run lead mid-way through the contest. Overall, Iowa hit when it mattered the most, batting .429 with runners on the base paths while striking a mark of .545 with runners in scoring position. Iowa touched up a mark of .385 with two outs and what made things even more clutch was that four of those two out hits resulted in RBI.

Meanwhile, on the defensive side of things, Iowa limited Central Michigan to 1-of-9 in two-out hitting, 3-of-17 with runners on the base paths, and 2-of-11 with runners in scoring position. The very same pitching staff that leads the nation in strikeouts-per-nine innings (13.2) was dealing once more, posting nine strikeouts across six total pitchers. It was a committee outing which did not let the Chippewa offense get comfortable, limiting Central Michigan to just three extra-base hits, non of which eclipsed a double. Ace Adam Mazur lead the way with five innings pitched, matching that with five strikeouts with just two earned runs allowed on the night. The Hawkeye pitching staff limited Central Michigan to five hits, its 10th game allowing five or fewer hits this season

The contest actually began with quite a bang for the Hawkeyes as freshman phenom and Ballard High School product Sam Petersen blasted his second moon-shot of the season to give the Hawkeyes the lead.

“On a day like today, I was thinking to put a ball in the air that side is all you’ve got to do,” started Petersen. “It was my approach to go that way and I got it up. When you win Friday, you just feel like your ahead the rest of the weekend.”

The big strike came in the second inning with two Hawks already on the pond as Iowa raced out to a 3-0 lead. That lead would last until the sixth inning as a 3-1 lead vanished into a 4-3 deficit for Iowa as two Central Michigan RBI doubles gave the Hawkeyes a scare. That deficit for Iowa would not stand for long and it would be the only such deficit they would face all game long.

Iowa touched up one run in the sixth inning off of a Kyle Huckstorf single to tie up the game. Then the blazing hot Keaton Anthony added his second of two hits in the game (18th overall) to give Iowa a 5-4 advantage following the seventh. That marked a team-high eighth multi-hit game. For good measure, head coach Rick Heller’s squad added two more runs in the ninth via Michael Seegers (9) and Brayden Frazier (12).

“We’ve played in some games like that, and we didn’t recover from it,” said coach Heller. Today was a great sign because we went out and scored runs in the last three innings. We recovered from it, we had four two-out hits to score runs and our bullpen came in and was really good.”

The win now gives Iowa an 11-8 record on the season. Next up will be game two of the series on Saturday as the Hawkeyes will now turn towards dominant closer Dylan Nedved for his first start of the 2021 season. First pitch will get the contest going at 2:05 p.m.