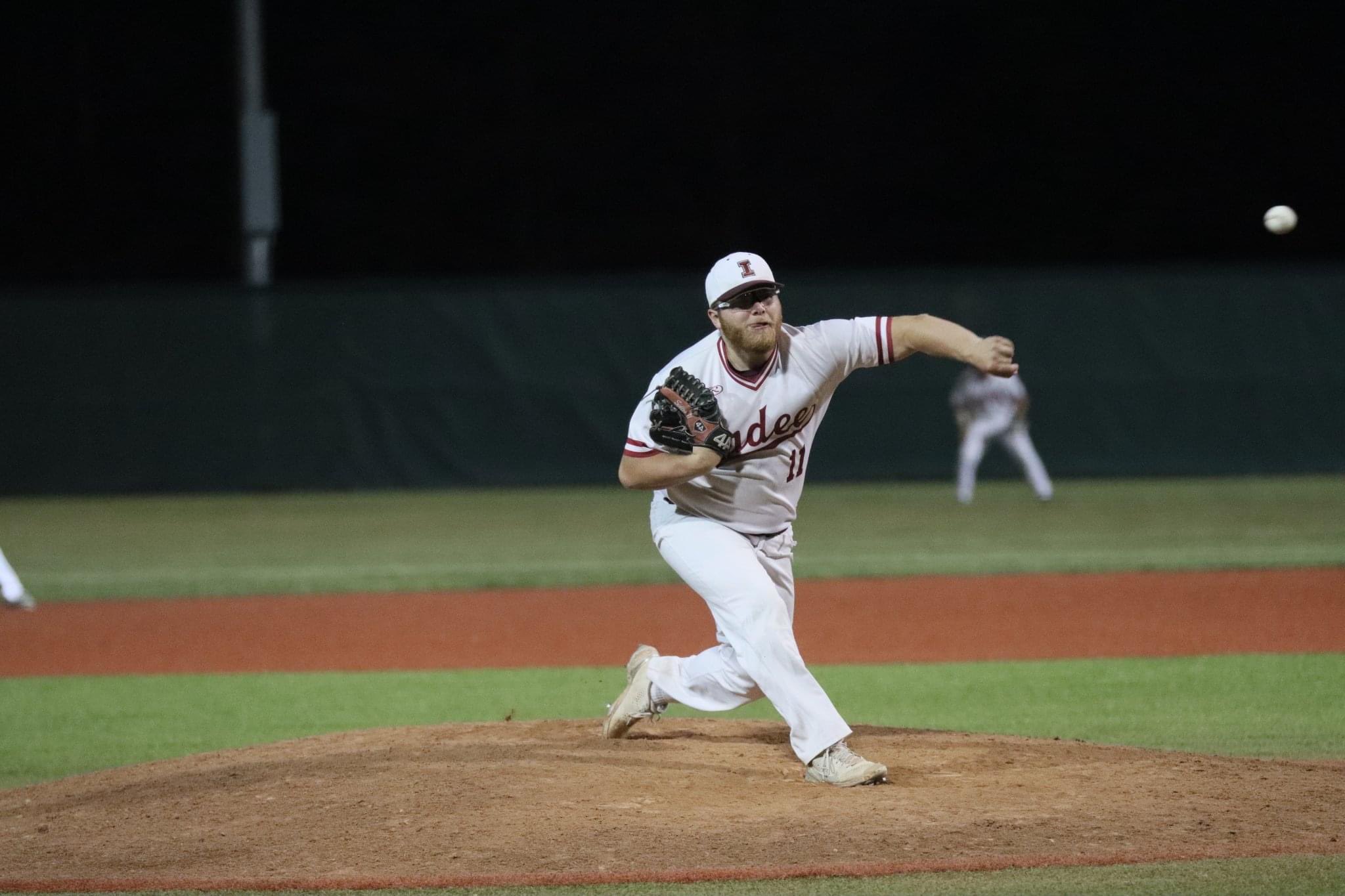 When it comes to inspirational tales, there’s one you may not know about yet. A true nose to the grindstone type of person who has risen to new heights, despite a big setback. This individual is a pitcher who is truly making the most of things and it has shown across 2022.

This hurler has become known for picking up victories, resting 6th in Class 3A and tied for 22nd in the state with seven wins. His senior season has shown nothing but strong pitching as this individual has sported an ERA of 1.46 across the regular season. When most people look at the overall stat line, they might think they’re looking at a star in the pitching world with a name that is widely recognizable. They sure would be looking at a star, but a name that isn’t a collegiate-baseball bound Justin Hackett or a Trever Baumler, instead a name that hasn’t garnered the attention it deserves.

That individual is none other than Independence High School multi-sport athlete in Jake Sidles. Like most athletes at the high school level, Sidles has performed in a multitude of different sports arenas from football to track and of course baseball. Excelling at everything has been a part of Sidles resume, and he has certainly taken that onto the baseball field with 34 strikeouts across 33 innings pitched entering the 2022 postseason. Again, with numbers like those, thoughts might be that such an individual would be headed to the collegiate ball diamond, but that’s where Sidles differs. He will be heading to the collegiate ranks ( such an athlete was bound for college sports anyway) but as a collegiate shot and discuss thrower on the track and field scene. Ultimately, the multi-sport participation has led to a lot for Sidles, by design.

“It was instilled on me early to play multiple sports and I knew it would benefit me in the long run,” said Sidles. “Playing multiple sports has helped me in all sports that I play.”

Ultimately, baseball has been the biggest passion for the now high school senior, becoming apart of his dreams into the future.

“Growing up, baseball was my favorite sport,” began Sidles. “I love everything about the game and I was doing good playing the game. Plus, I got to play it with my friends and it was (and still is) so fun for me.”

Now comes the real inspirational part of the story for Sidles. For every athlete in every sport, there will be challenges to overcome, for some more than others. Some athletes fold under the pressure that the challenge or challenges present, others take it and soar to new heights. For Jake Sidles, he belongs squarely in the ladder. Right from the get-go of his life, Sidles was born with an eye condition called X-linked Juvenile Retinoschisis. It’s a condition that occurs almost exclusively in males and causes cysts on the retina, impairing the sharpness of vision. For Jake, that meant no longer being able to pick up the ball as it came out of the pitchers hand to the batters box. It presented the biggest hurdle of all, one that would certainly send most people out of the athletic realm.

As one might expect, it hit Jake hard. Not being able to play the game to the fullest is something that would set any athlete back, perhaps take them out of the athletic scene forever. Then there comes individuals like Jake. Instead of sitting down and accepting defeat, Sidles vowed to make the most of what he did have left in the game. Although he hasn’t produced much with the bat throughout high school, Sidles has still balled out on the pitching mound where he has found a new direction that keeps him in the competitive conversation, still a valued tool despite a major medical setback.

“I knew I had this condition and when it started to affect me I thought to myself that I could give up or keep on going, and I decided to keep going,” began Sidles. “It was my eighth grade year when I still thought I could hit because the year before I had the best season of my life in USSSA and then I didn’t do as well. The following year, one of the assistant coaches (at Independence) asked what I do and then asked about pitcher only. I really wanted to continue to play the game I love and four the last four years, I’ve been primarily pitcher only, and I’ve always been focusing on improving my craft on the mound.”

All that work on his craft paid off for sure as Sidles’s numbers kept on rising through the years. That has led him to his senior season where he has given up just seven earned runs throughout the regular season. That’s without mentioning his career high 34 strikeouts through a career-high 33.2 innings pitched. Despite what life had given him, Jake took what he had and ran with it and when it comes to baseball, has never allowed more than 20 walks in a season and has never allowed 15 or more earned runs in a single campaign across his tenure.

Along that same vein, even though Sidles’ condition may have set him back a bit in baseball, it hasn’t done as such in a different arena of athletics. Come next fall, Sidles will be heading to Council Bluffs to become one of the newest members of the Iowa Western Community College track and field team. His part to be played will be with the shot put and discuss, something far from what he originally thought about growing up, but ultimately believes to be a blessing in disguise.

“Originally my mom made me go out for track and field in junior high,” began Sidles. “I was kind of upset and I didn’t even know that throwing was a thing. Then my coach at the time, Marcus Beatty’s dad, talked to me about throwing. I was like, there’s throwing in this sport? From there I picked it up really quick and just fell in love with it.”

Once again, despite a big obstacle thrown in his path, Sidles didn’t hesitate and found a way to continue as much of baseball as he could, plus etch his name into the collegiate athletic books with his commitment to Iowa Western.

Now, in the situation that Sidles resides in, some individuals might just forgo their senior season of baseball here in Iowa in pursuits of their college endeavors. Once again, that’s where Sidles differs. The desire to finish out his final year of high school ball, improving upon his prior stats, and helping the program continue to soar to new heights was at the forefront of his thinking right from the get-go.

“It’s always been important for me to stay out for baseball for a number of reasons, including the fact that I’ve been playing with the same set of six seniors since we were three or four years old,” mentioned Sidles. “Plus, with how the last few years have gone, I knew we would have a really special thing going this year.”

He is certainly on to something when it comes to the specialness of Independence baseball over recent seasons. The Mustangs, heading into the 2022 postseason, are on track to capture their largest win total and (excluding the pandemic stricken 2020 season) their second-fewest loss total in 15 years. The core group of seniors that has led this program has truly embraced the “trust the process” mentality.

“As a group we knew we could do it, we knew we could go as far as we wanted to someday,” said Sidles. “Everyone on this team has put in all the hours and even though our freshman year wasn’t great, we used it and learned from it. That’s what we do as a whole team, learn from our mistakes and just go out an improve everyday.”

Speaking about improvement every day, Sidles has been an absolute shinning example of that. As we already mentioned, his stats have gone up every single year and he’s been a blaring voice of positivity on a team that has done nothing but climb the ladder year in and year out.

“My biggest focus for me has been lower body mechanics,” started Sidles. “My mechanics when I was young weren’t great, I was just bigger than everyone and I kind of got away with some things. Now I’ve really focused on that and my off speed pitches. I always knew how to throw them but since high school, I’ve learned to throw them effectively. I don’t throw it extremely hard so my goal has always been to keep batters off balance with my off speed pitches. Ultimately practicing every day has done a lot as well.”

Again, we will state that Sidles is bound for collegiate track and field, meaning he still has to find ways to remain in throwing shape for that sport, even though he’s performing in season with the sport of baseball. While there are various similarities in the way an athlete would preform in the sport of track and field vs baseball, the sports themselves are still very mutually exclusive with different approaches to muscle performance. In the world of baseball, especially throwing, a good core is vitally important while the outer portions of the body such as the forearms, hands, and even shoulders, can make or break performance on the mound. Both sports arrive at hitting as specific of a target as possible but the movements once again are not the same.

“There’s a lot of the same stuff and when I’m in position throwing the shot or discuss, throwing the hips for extra rotation and velocity are the same as baseball,” said Sidles. “That’s where the similarities really stops because when it comes to the upper body, the delivery and overall performance are completely different.”

The fact that discus throwers, for example, need a flat plane when releasing is often a complete opposite of what has to happen with the baseball. Different grips and different angles give a non-flat baseball anything but a flat release point for most individuals throwing the baseball. Plus with the weight that both the shot put and the discus present, it’s harder sometimes to pick up on accuracy when so much of the energy is put into getting the implements out as far as possible.

“There are a lot of differences but for me, the biggest thing is that both sports have come so natural to me,” began Sidles. “I just go into each sport focusing on what fundamentals are specific to the sport, make sure I warm up properly with the proper mechanics to that sport, and just don’t think about things too much. Just go out there and give it my best.”

So now, as the Class 3A and 4A postseasons kick off, be on the lookout for perhaps the most inspirational tale the state has to offer. Jake Sidles, a player with a huge setback, not pushed back by one of the biggest obstacles to face baseball, succeeding where others would fall. There’s a multitude of reasons why we love the game of baseball, and one glaring reason is guys like Jake who continue to defy odds, get out there, and go all out, making what they have work to the fullest.

Check out Jake as he and the Mustangs head into postseason play. If you get the chance, congratulate him on what he’s overcome and what he’s done for the sport of baseball.