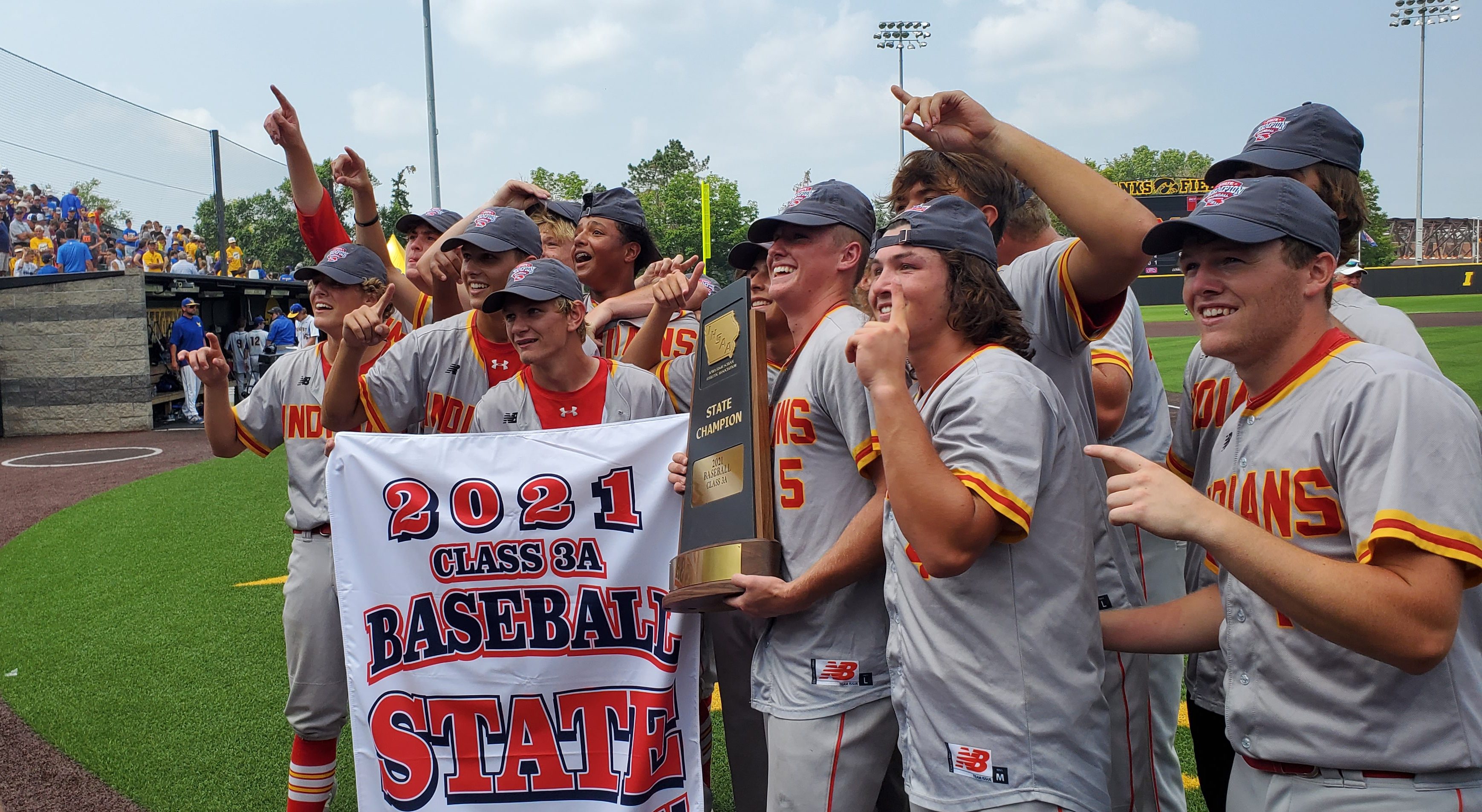 No matter what happened at the conclusion of the Class 3A state title game on Saturday, history was going to be made. Both participants in the Wahlert Catholic Golden Eagles and the Marion Indians had never touched up a state tournament title game before, let alone win it all. But that all changed Saturday afternoon from Duane Banks Field as the top-seeded Indians captured the win in a shootout by the thrilling final of 7-6.

With Marion capturing the title, it meant their first title in six appearances but there was also much more history tied into it. Head coach Steve Fish has had an illustrious career entering the state tournament with over 760 victories except a victory to win it all. Following a back-and-forth battle that held two lead changes, he finally captured the biggest victory in his career as he the title win gave him 763 victories.

“I don’t think I’ll stop smiling for awhile now,” laughed Fish. “This team believed they could do this and felt like it was their time. This is such a special group and such an amazing bunch of talented athletes. It’s been so great to coach them throughout this season.”

Pretty much everything about this win was special including the way in which it was secured. The walk off winner was in a way return fire as the last time these two teams faced off in a state tournament game, it was Wahlert to walk away with a one-run seventh inning walk-off. It was a game that went down to the wire in every aspect including that of the teams’ very name. The mascot name “Indians” was just one day away from being retired as Aug. 1 marks the change of names to the Marion Wolves.

En route to producing the most wins in program history, the Indians had to endure their toughest test of the tournament. After capturing victories by no less than seven runs leading up to the title game, Marion battled in a game that never saw any lead grow beyond four runs. The contest began just as much as you would assume it would being a state title game between two teams averaging over seven and 10 run respectively. It all started off as hot as could be as Wahlert Catholic spotted a pair of runs in the first via a Walsh RBI double and a Ben Brosius RBI single. As was the case with the entire contest, Marion would engage in a back-and-forth battle by posting up a pair of first inning runs of their own on an error and a fielders choice. As part of their 13 team hits spread out across seven batters, Marion helped their cause out in a big way with a big four run fourth innings. Those four runs came off of four hits and gave the Indians their first and only needed lead of the contest.

Of course, there was not setting down Wahlert Catholic easy by any means and the Golden Eagles clawed their way back with a two spot in both the fifth and seventh innings, the ladder of which kept the game alive after being down by two runs entering the seventh.

That then set up the top-3A team from the early goings of the regular season to play ultimate hero in the bottom half of the seventh inning. Following a single and two batters hit by pitch, the stage was all set for Marion to walk it off. Much to their enjoyment, that meant trotting back out one more time freshman phenom and University of Iowa commit Myles Davis. With a title on the line, Davis connected on a hard hit ball to right field, effectively giving Gage Franck on third plenty of time to tag up and give the Indians the ultimate W.

“I was looking for a fastball that I could put somewhere, trying to hit it deep enough to get a run in and I did,” said Davis. “It was really cool to do that on a field that I’ll be playing on in four more years.”

Overall, Davis was one of four Marion batters to touch up two runs or more including the pair of Gage Franck and Lucas Unsen who totaled three hits a piece. On the other side of the spectrum, after putting on a stellar performance in the tournament opener, junior Boede Rahe went toe-to-toe with the hard hitting Golden Eagle team, striking out four along the way.

“I knew I wanted to pitch in this game, I felt like I was so ready for it,” began Rahe. “The name of the game was efficiency and I think we as a team did a great job of that and it helped us win today.”

Part of the ebb and flow to the game was Rahe’s ability to hold off several Wahlert runs as the Golden Eagles ended up with five opportunities with runners on third. Rahe and the Indians thwarted them all and a lot of that had do do with that very efficiency.

“We knew they were a good hitting team so it was all about hitting the outside and working that curveball in down the middle,” said Rahe.

In total, everything from the hits to the runs were well earned as there was only four combined walks the entire game (Marion having three of the four). It was as exciting of a state title game as anyone could ever hope for and with it, came a lot of good feelings. That included coach Fish who has been loving baseball ever since he could remember.

“My dad took me to a Washington Senators game when I was young, I then saw the field and the grass, and I was hooked,” began Fish. “From then it was just something I enjoyed doing no matter where I was around the world.”

In a prior article we mentioned the family ties to the major league level that Florida International commit Owen Puk has and his willingness to come back to the high school ranks for one more season before he engages in a college career. Coach Fish has a similar scenario and one that also has family ties and why the state title win means so much more.

“Family is everything and has been everything to me,” said Fish. “My youngest son has been with me in the dugout ever since he could walk. He’s played for me and as of recently has been coaching for me. This win is so surreal for me because it’s the last time he’s going to coach for me before he goes off to grad school. It’s been such a blast having him along and to win it all as he’s leaving means a lot.”

Meaning a lot may be an understatement for coach Fish and his team as they have made history all over the place.

“To be called the champions means the world to us,” said Rahe. “All the work we’ve put in during the offseason and all that we’ve gone through the last few years has been leading us to this moment and this win.”