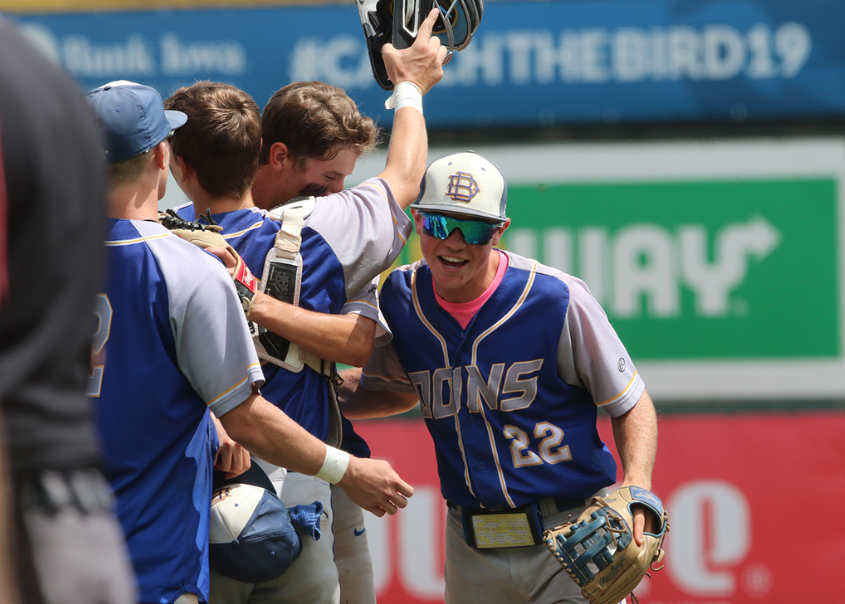 The Newman Knights are on a roll! They have won 13 consecutive games and show no sign of slowing down. This past Monday first baseman Nash Holmgard became only the fourth player in state history to hit four home runs in a game, as he hit for the home run cycle in a 15-4 win against West Fork.

The North Linn Lynx are right on the heels of Mason City Newman for the top spot in Class 1A. Senior catcher Alex Sturbaum is commanding a special rotation, as Lynx pitching continues to stifle opponents left and right.

The Falcons move up a spot this week to number three in our rankings. Cy Patterson is on an offensive onslaught and currently leads the state in RBIs with 51.

This week the Hawks of Remsen St. Marys come in at #4 in our rankings. Monday night they will host the Jays of Gehlen Catholic, who are riding a 12 game winning streak and beating some excellent teams.

The Trojans of Tri-Center have been under ranked all season and all they have done is continue to win baseball games handedly.  A lineup with power, the Trojans have 19 home runs as a team this year with eight different players sending one into the seats.

The Panthers come in at #6 in this week’s rankings. Monday night they will travel to face the Wildcats of Woodbury Central, a battle between the top two teams in the Western Valley Conference. The Panthers won the first game earlier this season 6-0.

The CAM Cougars come in at #7 this week. Juniors Colby Rich and Lane Spieker are on fire! Both players are tied for the most home runs in Class 1A with 8 apiece.

The Dons have fallen just a couple spots, coming in at #8. They face some tough road opponents this week in Jesup, West Marshall and Janesville but this team is on a 5 game winning streak and looking to carry their momentum on into the postseason.

The Tigers remain as the only undefeated team left in Class 1A. Junior Josh Catala has provided a boost on the mound and with a bat in his hand. He has a 5-0 record and is currently batting .444 with 21 RBIs.

And the final team to round out this week’s rankings is Ankeny Christian. Another team that continues to fly under the radar, the Eagles pitching staff has been excellent. Malachi Johnson has been throwing the heat!