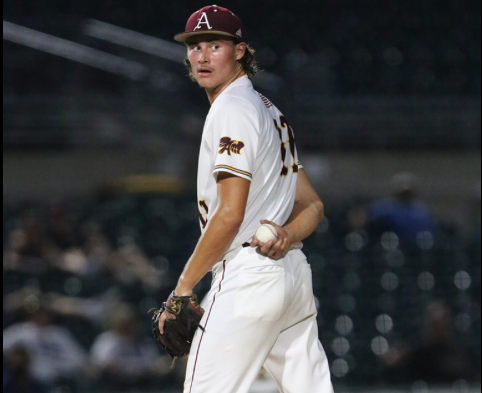 More excitement added on to the train that is Ankeny’s Brody Brecht. The University of Iowa football and baseball signee recently had more to celebrate as he was recently named as Iowa’s Gatorade Player of the Year. It’s just another of many accolades that have rolled in for the high school senior who continues to garner attention on the national level.

The Gatorade Player of the Year honor is in its 36th year of announcing top players in each state that sanctions football, baseball, girls volleyball, boys and girls cross country, boys and girls basketball, boys and girls soccer, boys and girls track, softball, and more. This year, Brecht was the recipient from Iowa on the baseball side of things while also becoming the second individual from Ankeny High School to earn the honor. The award recognizes both outstanding athletic excellence but also academic achievement and character demonstrated on and off the playing field. The selection process itself works with top individuals in each sport-specific field along with veteran media individuals to determine state winners in each sport. With the recognition, Brecht now is in the running for the Gatorade National Baseball Player of the Year award which will be announced in July. Just to really drive home how special this honor is for Brecht, he joins a very elite company of state award-winners in 12 sports such as Derek Jeter (1991-92 Kalamazoo High School in Michigan), Clayton Kershaw (2005-06 from Highland Park HS in Texas), all the way to Chicago Cubs star Kris Bryant (2009-10 from Bonanza HS in Nevada) among others. The most recent Iowan to earn such a distinction before Brecht was Western Dubuque product Calvin Harris who just wrapped up his first season at the University of Mississippi.

Brecht has definitely shown his brilliance when it comes to the sport of baseball. The 6-foot-4 pitcher and outfielder has sported a 2.45 ERA with 69 strikeouts and a 3-0 record through just over 34 innings this past year. Offensively, he was just as strong sporting a .333 batting average with three homers and 27 RBI, not to mention an OPS of 1.084. Across the 2021 campaign, he’s acquired a class fourth-best five victories on the mound on the heels of 61 strikeouts (top-5 in Class 4A).

Following a state finals trip, Brecht was named to a first-team All-State selection and the third-ranked draft prospect according to Perfect Game. On top of all of that, Brecht has maintained over a 4.0 GPA in the classroom. The senior is also a Fellowship of Christian Athletes member who has volunteered locally. Now, through the Gatorade Player of the Year marketing platform “Play it Forward”, Brecht now has the opportunity to award a $1,000 grant to a local or national youth sports organization of his choosing. He is also able to submit a thirty-second video detailing why that certain organization would be deserving of one of twelve $10,000 spotlight grants. Up to this point, Gatorade Player of the Year honorees have totaled more than $2.7 million in grant money to over 1,100 organizations.

Certainly another feather in the cap for Brecht who can savor this flavor but not for too long. Coming up in early July, the MLB draft will be taking place and with it, a big decision for the high school senior. There has been a lot of conversation regarding Brecht as an early-round draft pick. A more detailed location still has yet to be determined, largely in part due to the uncertainty of what sport Brecht decides to take on in the future. Brecht has repeatedly verbalized his interest in playing football at the collegiate level even with the rising interest from professional baseball organizations.

Until the next big decision is made, Brecht will be seeking to help his Hawks squad to their 15th state tournament appearance in school history.