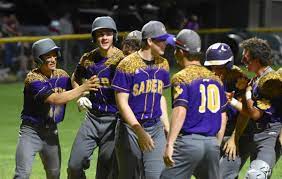 3.) Central DeWitt (8-2): Only two losses of the season to Class 4A top-ranked Pleasant Valley so in the Class 3A world they’re still undefeated.

4.) Gilbert (8-4): The Tigers did go 4-2 on the week with two wins of 10 runs or greater. The 11-4 loss to Ballard is slightly head-scratching for a team that returns nearly all of the state tournament run from last year. It will still take more than a loss to an impressive Ballard team to knock them out of the top-10.

5.) Dubuque Wahlert Catholic (12-3): I knew coming into this week that Wahlert would be a team to either move into the rankings or remain firmly out of. An already impressive first week (with a split against Hempstead) followed up with a split against Iowa City West and Linn-Mar. 4th in Class 3A with 138 hits and third with 10 home runs. 2nd in total bases at 209.

6.) Winterset (9-4): Their two biggest games of the week the Huskies lost. Lost 4-3 to Ballard and 7-1 to Gilbert. They really stand pat because of their one run victory over Class 2A’s top-ranked Van Meter.

7.) Boone (9-4): The Toreadors drop in the rankings mainly due to an 8-7 loss to Bondurant-Farrar. They also dropped a hard 10-3 battle against Ames.

8.) Davenport Assumption (9-7): Split with Davenport and North Scott. Still deserving of a top-10 spot with even more tests coming their way.

9.) Grinnell (12-3): Just two runs shy of a second sweep, swept Indianola and split with Pella. The only other loss was a 3-1 defeat to 4A Norwalk. Top-10 in 3A in at least six different offensive statistical categories, second with a 1.65 ERA, while leading the class with 137 strikeouts. The offense may be good but it’s the performances on the mound that is carrying this team.

10.) Storm Lake (11-4): Lost their two bigger tests of the season against Bettendorf and North Scott. 105 team strikeouts on the season keep this team running on the mound. It’s practically a tie with MOC-Floyd Valley for this spot. Big reason why the Tornados got the nod was who they lost to comparatively to the Dutchmen.