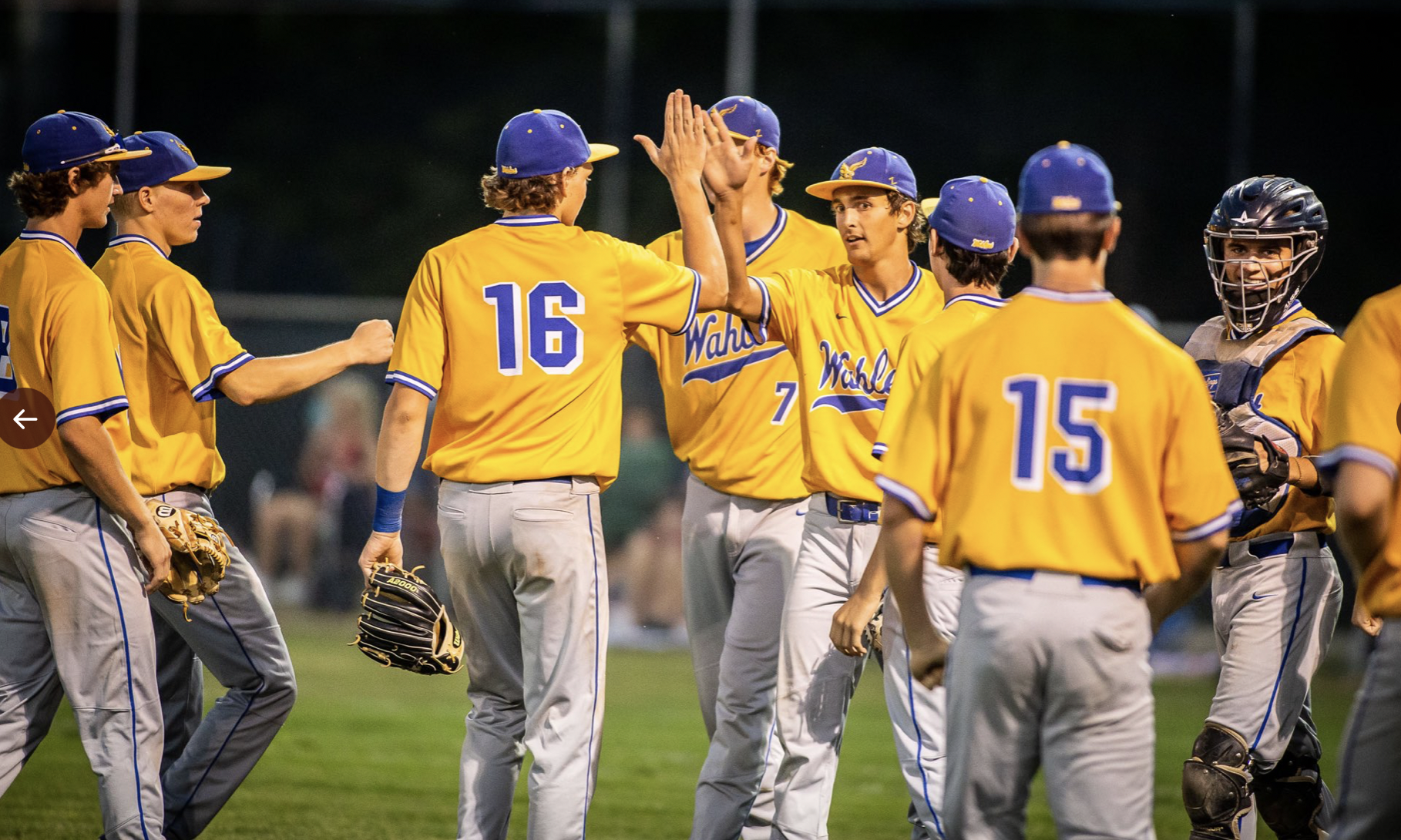 In a day that started off with history being made, it was only fitting for the battle between Wahlert Catholic and Xavier to also be in the conversation. After Marion clinched their first state title game appearance in program history, the Golden Eagles matched that with their 10-7 victory over the powerhouse Saints, also their first-ever trip to a title bout.

It marked the first victory for Wahlert Catholic over Xavier on the baseball field since May of the 2018 campaign as well as the first win over Xavier in state tournament play.

“That was such a rollercoaster ride for both teams here today,” said Golden Eagle head coach Kory Tuescher. “It feels great to be able to do this and to do so against a team like Xavier is something special.”

It sure has been a bend but not break mentality for coach Tuescher and the Golden Eagles. Despite being swept by the Saints during the regular season and outscored 10-3, they rallied and never faced a deficit Friday afternoon at Duane Banks Field. In fact, they posted up the third-most runs against a Xavier team all season, despite the Saints holding teams to under four runs per game on average.

“We knew coming into this game that Xavier was capable of putting runs on the board and making comebacks,” said Tuescher. They did so this postseason so we knew it was going to be a battle.”

And a battle it sure was. In total, seven Golden Eagles recorded at least one hit as Wahlert struck for 14 total as a team, one of the highest hit totals Xavier has given up all season. Mixed in with that was three extra-base hits including a double, triple, and a home run. The ball that went yard came off the bat of none-other than Golden Eagle star Aaron Savory who took a one strike fastball over the left field fence in the very first inning of play. That was part of a fantastic start for Wahlert as they posted three hits and four runs for a commanding 4-0 first inning lead. Tack on one more run in the second, and it was a 5-0 game after two innings.

“We had a great start to the game and honestly, thought about with being one run away from taking out starter out early and giving him some rest to potentially pitch him Saturday,” said coach Tuescher.

But, as things would go, the two time state champs in Xavier were not going to go easily and they stormed back in the very next inning to cut the Wahlert lead down to 5-4. The Saints really pushed the game and ended up going 5-for-11 with two out. In fact, Wahlert had a tough time capturing that elusive third out at times and it lent to Xavier’s advantage as six out of their seven runs scored came with two outs. Half of that success could be contributed to hitting 3-of-6 with bases loaded. Yet through all of that, the Golden Eagles pushed through and ended up with five different situations with a runner on third and less than two out, situations in which Wahlert went 4-for-5.

“The offense really stepped up today,” said senior slugger Jake Brosius. “We haven’t beat Xavier in awhile so to get one from them is great.”

Of all the individuals to appreciate the explosion of offense, Wahlert starter Jared Walter was very happy with how the bats were doing.

“I really kept my calm and focus by trusting the guys behind me and my teammates at the plate,” said Walter. “Right after that first inning we had I had all the confidence in the world. It all helps a lot.”

In total, the Golden Eagle offense was 10-for-23 with runners on base. Overall, the victory for Wahlert Catholic marked their third state tournament victory in school history. Their “prize” for winning is a title game match-up with top-ranked Marion. When these two teams meet up Saturday afternoon, they will do so not as strangers.

Saturday’s matchup will be the fifth time that the Golden Eagles and the Indians will have battled each other. It also won’t be the first time either team has faced each other in postseason play. In fact, both teams ended up meeting in the quarterfinal round of the 2017 state tournament. Overall, Wahlert has the postseason edge over Marion 2-0 but the series is tied at 2-2 with the Indians taking the most recent battle.

There’s no doubt, it will be a special state title game and no matter how you view it, there will be a first time state tournament winner walking away Saturday. For Wahlert, after setting a school record for wins in a single season, they will look to conclude what has seemed like and ending four years in the making.

“Life is all about the journey and for theses guys, they’ve put in a lot of work along the way,” began Tuescher. “There’s more to the three months than what happens during the regular season and they’ve put a lot of work over the last few offseasons and it’s exciting to have come this far.”

The Walhert Catholic Golden Eagles will square off with the Marion Indians on Saturday with first pitch scheduled for 12 p.m.