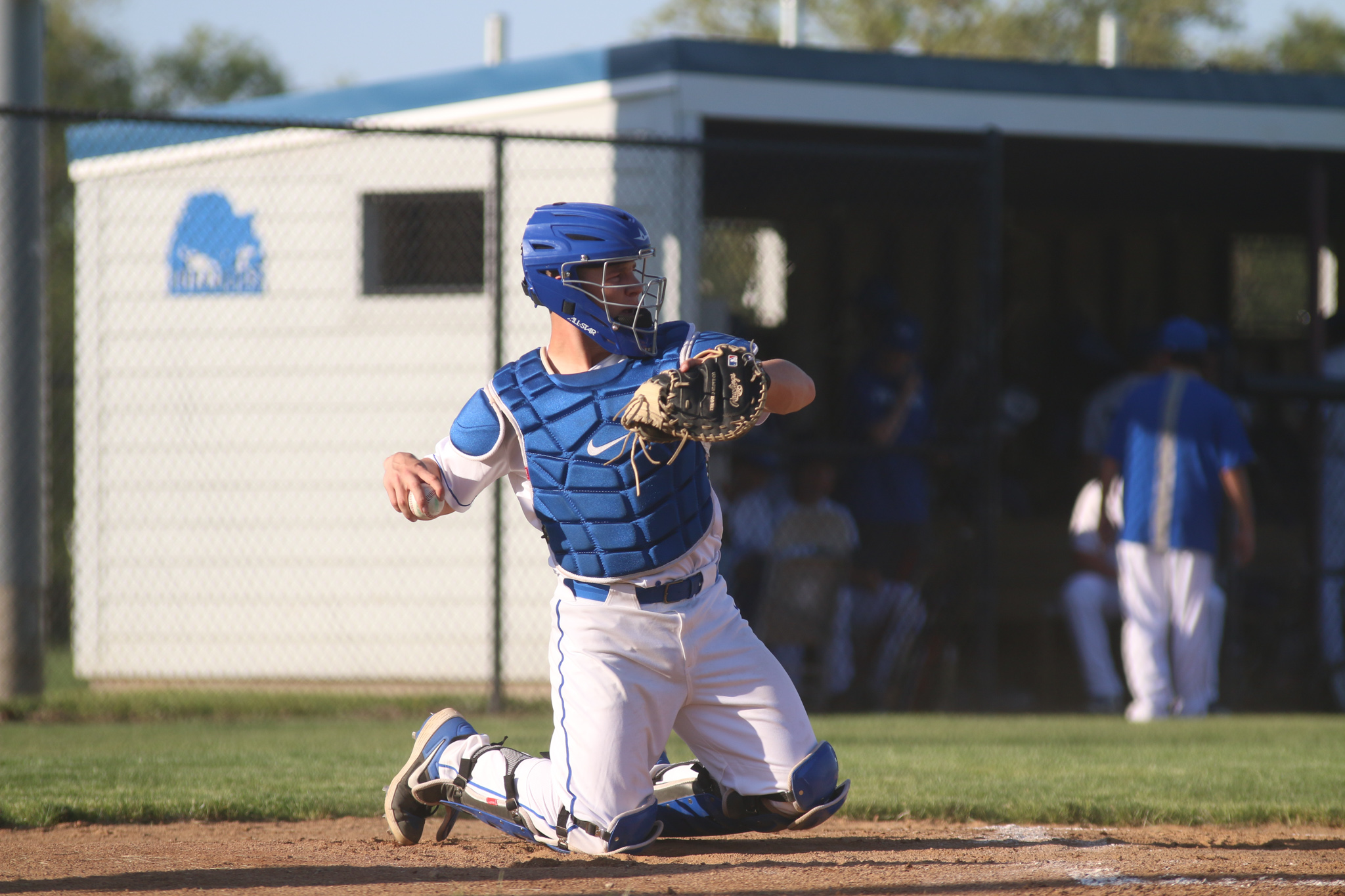 It’s not often, even in today’s world of instant access and quick transportation, that we get to witness generational type talent. We here in the state of Iowa have been blessed with a lot of great talent to come out of the state of Iowa. From Steve Dryer to Bob Feller and even Ian Moller all the way to newly minted College World Series Champion Calvin Harris, there has been great talent, but only a few have gone beyond that.

As we sit here in 2022 there are several big names that have come across the national stage from Iowa. Potential high-round draft pick Tommy Specht, TCU commit Justin Hackett, and fellow TCU commit Trever Baumler have been some big names floating around recently….but there’s another name that’s being thrown in with the “once in a lifetime type of talent” conversation. That would be none other than newly minted Van Meter Bulldog and future University of Iowa baseball star Reese Moore. Originally from Forest City, Moore and his family moved to Van Meter prior to the ’22 season commencing and has since improved upon already lofty expectations of him. Moore committed his talents to the collegiate level with Iowa back in August of 2020 and has since done nothing but prove the Hawkeye right in going after him.

Across the 2022 season up to this point, Moore has been on an absolute tear, demolishing baseballs and helping his new team to an undefeated regular season run. It’s really hard not to notice in fact. Moore’s name is tattooed all over the top-five in nearly every statistical stat book. In fact, heading into state tournament action, he’s the current state leader in home runs (14), RBI (63) as well as second in slugging (1.191), one of just seven batters to sport a slugging mark over 1.000. He also paces the state with 112 total bases prior to arrival at Merchants Park.

“Reese is a great player and a joy to be around,” said Van Meter head coach Evan Baumhover. “Coming here you could tell he put in the work and ever since arriving here he’s been doing nothing but putting in the work.”

Moore has paced the state field in at least three offensive statistics for over half the season in 2022, showing just how potent and consistent of a batter he is. Of course, that very aspect of consistency has been one of the cornerstones that Moore had based a lot of his play off of.

“The biggest thing for me is just going out there and being consistent,” mentioned Moore. “Consistency helps everything else improve and get better.”

Of course, it’s more than consistency that the senior catcher brings to the table. Moore ranks as the only individual across all four classes to sport at least 15 doubles, at least 55 RBI, and a total base count over 110. On top of that, he has sported 17 stolen bases, once again, putting him in a class all his own. He is the only individual who has totaled at least 17 stolen bases or more to produced 10 or more home runs. It’s been nothing but a testament to his overall skill on the diamond. That very overall skill led him to the be Class 2A’s “triple crown” winner back in 2020 where he paced the class in batting average (.585), home runs (8), and RBI (35). All of that was done as a sophomore and even then as is the case now, there was nothing but a humble player behind it all.

“Honestly while it is cool to have your work highlighted in that way I wasn’t too concerned about it,” began Moore. “I’m all about how to help my team win and improve every game and it just so happened that all of that was helping my team.”

While many of us baseball fans are seeing all of this blossom during Moore’s farewell high school tour, this isn’t something that’s news to those who new him prior to arriving in Van Meter. One such individual was Forrest City head coach Jeff Jerome

That passion manifested itself into playing time early and often at the varsity level. In fact, Moore has held time in varsity action all the way back to his eighth-grade season. From there, it was nothing but more as Reese ended up leading his class in home runs twice over the last four years, led in RBI once, and beyond. Throughout his time in high school ball, the power bat has been just as strong as anyone with a plethora of strong qualities, with one that stands out.

“Reese has always had good timing,” said Jerome. “If his timing is on, which it is the majority of the time, he can hit to all fields and do so with power. Of course that comes with the help of putting a lot of time in.”

Putting in the work certainly has been something that has been ingrained in the fabric of Moore’s athletic journey, regardless of the sport. In fact, it’s been the variety of the sports he’s played and the mindset to never narrow his focus that has led to a lot of success in his athletic career. That has included being a state tournament wrestler, and dependable star on the gridiron as well as the success on the diamond. Some say that variety is the spice of life, but instead of saying it, Moore has lived it as one of his many tools for an overall athlete growing up.

“I’ve never believed in specializing at one sport and my parents helped to instill that in me early on,” said Moore. “I actually tried basketball early on but just wasn’t as good at it. Tried wrestling and absolutely loved it. Then I fell in love with football but no matter what, I knew that putting in the work and being sound at multiple sports would really help me later.”

Now with every great athlete there comes a multitude of challenges that end up acting as rungs in a ladder as they climb their way to the top. Along with a good upbringing from his parents and help along the way from his coaches, there’s one another aspect Moore credits for his success. That and a person in particular, in a city nearly 30 miles away from the town he grew up in. It caused an impact that resonates with the future collegiate star to this very day.

“When I was 12 years old, I joined a travel baseball team in Mason City,” started Moore. “At first I was not successful and I had some doubts but I just stuck with it. The next year I started to become successful and really fell in love with the game and knew that’s what I wanted to play in college.”

From there they say, the rest is history as Moore ended up securing and offer (and later a commitment) from the University of Iowa following his (triple crown) sophomore campaign. But no matter how successful Moore has become whether in Forest City or Van Meter, he has always remained humble and looks back to those days in Mason City, giving a shoutout to one person in particular. Such a particular person who now has another connection to the future Hawkeye.

“The first guy to ever take a chance on me was Eric Burt,” said Moore. “I was playing the Mason City league and was a below average player and they had an opening on this travel team and Eric took a shot on me and that’s the first time that anyone’s ever done that. That’s one person I can’t thank enough because he really influenced my baseball career and helped get it started. If he didn’t take a shot on me, I don’t know if I would have ever started playing travel baseball at that level.”

“Reese is an example of a kid with great combination of physical tools combined with exceptional work ethic,” mentioned Burt. “That’s what sets him apart because he embraces all of the “off season” things from workouts and such. There’s never really an offseason for Reese and that’s the way he’s been as long as I’ve known him.”

Burt mentioned also went on to talk about the fateful beginnings and the initial connection between him, Moore, and the historic travel team.

“Reese kind of just showed up in our little league system in Mason City and I remember he was on the mound and Max was at the plate and he plunked him,” laughed Burt. “You could see it then, his focus and love for the game. It ended up as a great fit for the team and wasn’t hard at all to have him join. From then till now, his baseball IQ is very high. Perhaps what’s more exciting is what’s to come. He’s always been a football, wrestling, and baseball guy. Even as good as he is you can see there’s more growth to go and as he focuses on one aspect, things will just take off even more.”

From all of that, it’s not hard to see why head coach Rick Heller and the Hawkeyes were so high on Moore from the beginning. The same could easily be said from Reese’s perspective on the Hawkeyes, a program he feels can help check off some of the biggest boxes on his list.

“For me, I knew I wanted to stay close and find a program that would fit my needs,” began Moore. “The ultimate dream I’ve had as a kid is to play Major League Baseball. Iowa has always seemed to be that program that could get me to the next level. The University of Iowa just seems like the best shot for me to continue my baseball career.”

Extending careers has seemingly been a big part of Iowa with over 170 total players having moved on to the professional ranks. That has included seven players selected within the first ten rounds of the draft since 1999 alone. Currently, there are 13 former Hawkeyes active in the professional ranks, something Reese has been interested in becoming one day, interest spurred on by some of the great left-handed bats to play the game.

“Growing up, I remember one of the turning points for my love of baseball came when watching Adrian Gonzalez hit for the Red Sox,” said Moore. “I really liked his swing and thought that it looked really cool. Then I would go on Youtube and watch people hitting like David Ortiz and Ken Griffey Jr. That’s when I realized that they hit left handed and I hit left handed. If I can replicate that, I could be successful.”

Now as we sit, a matter of hours away from the 2022 state tournaments, Moore awaits his chance to bolster what has already been a note worthy career. A career that has included an unofficial triple crown and appearances on multiple top-fives. It’s been a career that has only begun, but one for young players to take note of. While Moore has idolized the swing and work of MLB greats, middle school level players, travel ball players, and even fellow high school players would benefit from watching a future mega star in the making. From sound mechanics to a work ethic rivaled by none, Moore has put the entire Iowa high school baseball world on notice.

For now, fans get the pleasure of watching Moore in high school action for a little bit longer. One of the best players in the state will continue on from a season that’s given fans, coaches, and players alike much Moore to appreciate.

Flying High For More – A Look Into The Great Skyler Moss