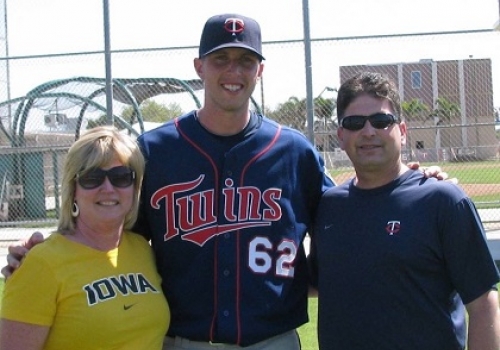 After what seemed like a short window of time, the Waverly-Shell Rock baseball team has a new head coach at the helm, ready to take on a new season. Following the departure of Casey Klunder’s 16-year run as the head coach of the Go-Hawks, the program is now turning to another notable Iowa name in B.J. Hermsen. As Klunder goes off to become the new face of Central baseball, Hermsen comes in now to lead a perennially talented Go-Hawk squad.

The excitement surrounding this news couldn’t be any higher and for good reason. Hermsen, a West Delaware product, has been around the sport quite a bit. From the Iowa high school state tournament with West Delaware to a member of the Minnesota Twins organization, Hermsen has flashed brilliance everywhere he’s been. He wowed the crowd while in high school so much that he passed on his commitment to Oregon State University to be drafted by the Twins organization in the sixth-round of the 2008 MLB Draft. From there, he spent eight seasons in the minor leagues, sharing time between A and AA ball. His first action came in 2009 where through 10 starts and 53 innings pitched, sported a 1.35 ERA and a rate of 7.1 strikeouts per nine innings. Things really got heated in 2011 where he 13-8 in 25 starts split between A and AA ball. There he struck out 101 while walking just 37 through 151 innings pitched. Perhaps one of the biggest years for Hermsen came in 2012 when he was named best pitcher in the Twins minor league organization after moving up to AA New Britain of the Eastern League. There, he posted a record of 12-6 with a 2.88 ERA.

Unfortunately, for Hermsen, when the 2015 season came around he suffered an injury that would cause him to miss the entirety of the season with Tommy John surgery. The Twins organization informed Hermsen that they would not be re-signing him and despite a try-out with the Rays organization, he wasn’t able to get back into the professional pitching ranks.

From his playing career, Hermsen kept on moving forward and ended up obtaining a UISRM Interscholastic A.D. certification from the University of Iowa. That allowed him to be an athletic/activities director in the state of Iowa. That’s where Hermsen first encountered the Waverly-Shell Rock school district, becoming the sophomore baseball coach and assistant basketball coach.

Hermsen now joins the Go-Hawk baseball program amid great times as the team will enter into the 2022 season with high expectations after gracing the state tournament for the seventh time in school history.