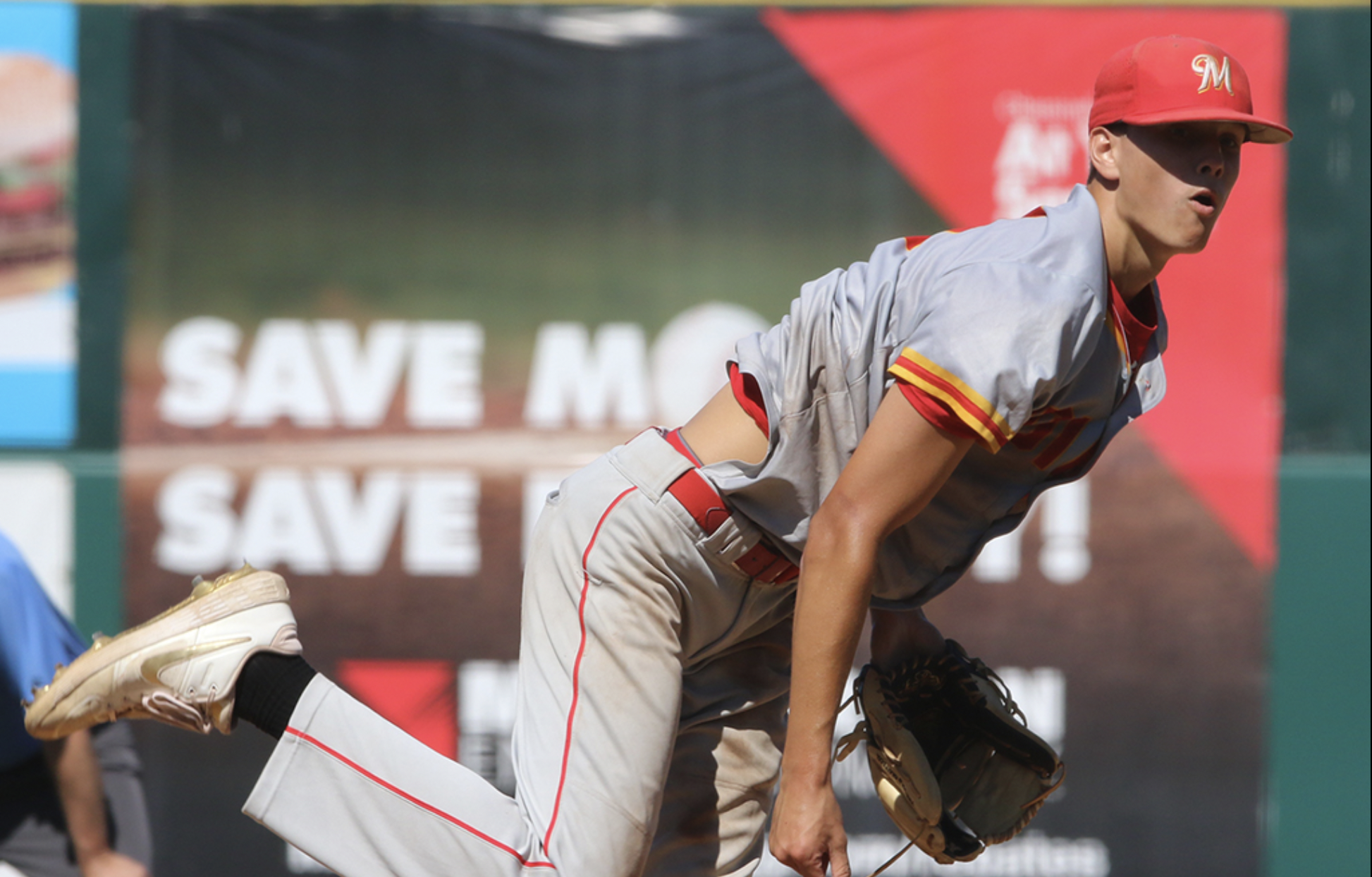 We are now just hours away from the start of the first normal Class 3A state tournament since the pandemic and things are as exciting as ever. Plenty of story lines have already dominated the 3A scene leading up to the first-ever state tournament in Iowa City.

Meanwhile, the team with the more recent state title win is Cedar Rapids Xavier who just so happened to defeat the Sabers in that 2019 title bout. The Saints do enter as the team with the most state tournament experience with seven trips while the Dutchmen of MOC-Floyd Valley grace the big stage for just the second time in program history. This season marks the third straight campaign where the WaMAC Conference has had at least two representatives in the state tournament meanwhile it’s the seventh consecutive state tournament that has seen at least one member of the Raccoon River Conference involved.

This state tournament also includes the top three pitching teams in terms of strikeouts, two of the top-five base running teams (stolen bases), and four of the top-10 RBI leaders in the class.

This is a matchup of the WaMAC Conference against the Raccoon River Conference. Both conferences have sent two teams to the state tournament this season. For the top seeded Marion, it’s a chance to continue to build off of what they’v been doing the last few seasons. It’s their fourth trip to the state tournament in five years and third consecutive appearance. Their recent run started in 2017 with a opening-round loss and graduated to two consecutive quarter-final appearances, losing out to the eventual champions each year. Now they have their eyes set on a title game and they’re doing so with the winningest coach among the entire 3A field as Steve Fish resides with over 720 career victories. His team enters as one of the favorites to take the crown leading all of Class 3A in doubles (88), RBI (314), and total bases (590). No other team has three batters batters in the top-10 in RBI across the state, leaving Marion the sole team to do so. Kaden Frommelt, Owen Puk, and Myles Davis all have 45 RBI or more and are three of four Marion players with collegiate commitments. On the mound, the Indians own the second most strikeouts in 3A (287) led by Boede Rahe with 82 and a 0.76 ERA.

On the other side of things, the ADM Tigers grace their second state tournament in three years with a sub-.500 record. Their path to state in 2021 was just as strong as it was in 2019 when they defeated DCG and thwarted Harlan’s 10th straight trip to state. This year those teams were replaced by substate top-seed Grinnell and Boone. They enter the state tournament with the lowest RBI count but have proven themselves to be the team that comes through in crunch time. The Tigers averaged eight hits offensively and seven strikeouts per game throughout the postseason. Senior Tate Stine-Smith has been the Swiss Army knife for ADM dealing 58 strikeouts on the mound while leading the team offensively with 38 total bases and 22 RBI. The Tigers have also had the heart-warming story in fellow senior Cole Williamson battling through a cancer diagnosis to play all 29 games for ADM this season claiming a .351 average and 20 RBI. It’s going to be a daunting task, but the Tigers are searching for their first state tournament victory in program history.

This is another exciting battle to keep your eyes on. It’s the first ever meeting between the Sabers and the Go-Hawks. It’s the first time that a Northeast Iowa Conference team aside from the Go-Hawks reached the Class 3A state tournament since the 2011 campaign. For just the fourth time in the past 13 seasons, the Go-Hawks have accumulated 30 wins or more and that included their championship 2015 season. They are the only Northeast Iowa Conference team (besides themselves) to enter the state tournament since 2011. Strike ’em out, run ’em out might as well be their team philosophy as they have paced Class 3A in both the majority of the season. They’ve accumulated 333 strikeouts while swiping 185 bases, a full 39 more than any other team in the class. Junior Chance Key is the one who drives the offense the most ranking top-10 in the Class with 53 hits, 53 RBI, and 90 total bases. On the mound, the Go-Hawks have also leaned on Key who held opponents to a .194 average while striking out 92 batters which is tied for fourth-most in the state.

The Go-Hawks are 3-3 in state tournament openers and will be searching for one more win as they look to claim their second title in program history.

Opposing the Go-Hawks will be the Sabers of DeWitt who will be making their fourth appearance to the big dance in school history. All four of their appearances have come since 2010 and twice that meant losing out to the eventual champion. Through the eighth strongest 3A schedule in 2021, the Sabers have captured 174 RBI and delivered 226 strikeouts on the mound. Their path to the state tournament including thwarting two ranked foes en route to Iowa City. That included besting 25-win Fort Madison and state tournament familiar in Assumption. It was the largest margin of victory over the Knights which sent the Sabers to the state tournament. Central DeWitt ended up outscoring their postseason opponents 22-3 up to this point, effectively holding three teams that averaged nearly seven runs a game to a mere one run each. Boomer Johnson looks to take the start for the Sabers on the mound as evident by his team leading 67 strikeouts through 56 innings pitched. Meanwhile Ben Mason will be leaned upon offensively with his 56 hits as well as Henry Bloom’s 30 RBI.

This is a battle of experience vs not as much experience. The Dutchmen of MOC-Floyd Valley have been impressive in 2021 and earned the second state tournament trip in program history. Meanwhile, the Saints of Cedar Rapids Xavier comes in as the team with the most tournament trips among the field. The offense for MOC-Floyd Valley was a big part of what got them to state and included 246 RBI which ranked top-5 in all of Class 3A. Meanwhile the Dutchmen have held opposing teams to a .271 average with the help of 223 strikeouts. One of the biggest stars on the mound has been Northwestern commit Colton Korver who has totaled 72 strikeouts entering the state tournament. Korver is one of two Dutchmen to commit collegiately and 5th since 2017 which included pro-bound Ben Zeutenhorst. The Dutchmen have won in a variety of ways throughout the postseason which has become a strength of this team. They defeated top-ten ranked Storm Lake by a 1-0 final to arrive at state in which Korver played the major role driving in the only run offensively and striking out four on the mound. MOC-Floyd Valley has and will utilize the skills of one of the more talented sophomores in 3A in Carson Jager who ranks first in our outfield position rankings courtesy of 35 RBI, 11 stolen bases, and a team-best .438 average.

Meanwhile, the Saints of Xavier will be on the hunt for their third title in program history. They return after a year away from tournament action after being stunned by Benton Community. They arrived after besting a tough Bondurant-Farrar team and a fellow top-10 ranked foe in Solon and a five game winning streak. This is a team that won’t give too many free passes as evident by their .952 defensive average ranking fourth-best in the class. They did all of that plus add 222 strikeouts to a schedule that ranked first among the Class 3A landscape. Alex Neal will undoubtedly once again be an offensive catalyst for the Saints as he has all season with 39 RBI entering the contest. The junior is also one to turn your attention to on the mound as he enters Iowa City most likely the starter for game one with his 80 strikeouts and just 13 earned runs allowed. That’s without mentioning another hot hitter that WILL have an impact in Jack Lux who’s .400 average and 42 hits includes a 3A best mark of eight triples.

This is a matchup well worth being the nightcap. The Golden Eagles return for their 12th state tournament trip in program history and first since the 2017 season. They have been thwarted in the substate final twice over the last few years and have officially rid themselves of that bad luck in 2021. It seemed like this season was destined to end in Iowa City for Wahlert Catholic. Even after leading bat Tommy Specht departed for a shot at a pro path, the Golden Eagles have been on a tear. It’s also included a milestone mark for head coach Kory Tuescher who officially became the 91st Iowa high school head baseball coach to hit the 200 career win mark. Within their 242 RBI that they’ve acquired, coach Tuescher’s Golden Eagles have slugged 23 home runs marking the most out of any team remaining in the 3A tournament. They are the only team in the tournament with over 100 extra-base hits and that will seem to play to their strength as they touch up tournament play. Leading that cause is the slugger known as Jake Brosius who currently leads 3A with 13 home runs as part of his 51 total runs driven in. Of course, if your looking for a weak spot you’ll have a hard time finding that as you go from the plate to the mound. Aaron Savory and his 83 strikeouts lead a pitching staff that ranks third among tournament teams with a mere 97 earned runs allowed.

One of the two teams to best Wahlert in fewest earned runs is Winterset who has given up just 86 earned runs while touching up Class 3A’s second best mark of 287 strikeouts. There’s no doubt that pitching is the strength for this team heading into the tournament as it has been all season. TCU commit Justin Hackett leads that charge with his 80 strikeouts. The thing is, there is depth to this pitching staff with three total hurlers totaled 60 strikeouts or more. There’s no doubt that has played a big part for the Huskies en route to their third state tournament trip in program history. Of course, there’s the offense to worry about to which houses four players with 30 hits or more, and four players with at least 23 RBI or more. With a combined overall solid team, the Huskies will be on the lookout for their first state tournament victory in program history and it will come under the fantastic lights at Duane Banks Field.