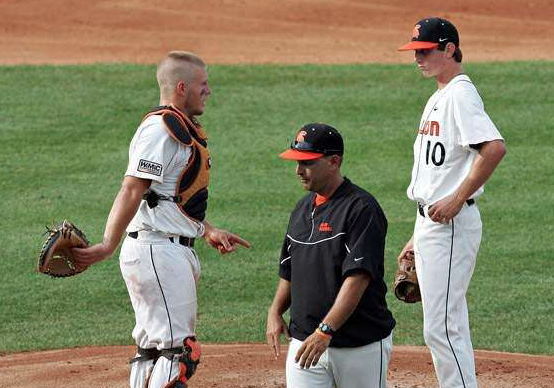 1.) Marion (24-4): A strong 5-1 week for the Indians as they posted an impressive sweep over Beckman Catholic and split action with Solon.  Even in their losses the Indians are impressive and showed that against the Warriors sporting 20 walks between the two games. They still sit top ten in strikeouts (204 – 7th), earned runs allowed (77 – 9th), team average (.386 – 1st), TB (1st – 426). Ultimately top-10 in over 7 offensive categories.

2.) Gilbert (18-7): The Tigers continued to show their strength again this week with a 5-0 slate that included impressive victories over Ballard giving them their third scoreless loss and Winterset, keeping them off the scoreboard for the second time all season. That also includes an impressive win over 2A third-ranked Kuemper. Even though he’s a pitching ace, Easton Johnson has continued to showcase his bat striking 35 hits and 59 total bases so far. Four of those hits came this week which included his third home run of the season. (Eli Eldred picked up his first HR)

3.) Solon (24-8): This was an impressive week for Solon who went 6-1 against a tough slate. They swept CCA, toppled Regina Catholic, then, rounded it all out with a split against top-seeded Marion. Freshman Brett White continues to thrill at the plate amassing 38 RBI tied for third-best in 3A. Then you add on junior sensation Kinnick Pusteoska who totaled 17 XBH so far with 35 RBI making the Spartans the only team in 3A with two batters in the top-10 for RBI’s.

4.) Xavier (21-12): Started off the week with one-run losses to Linn-Mar and Hempstead, but wrapped up the week with a victory over the Mustangs and a sweep over Wahlert Catholic.  Add in the victory over Prairie to start this week, and the Saints are firing pretty hot.  Among the many helping out that cause is Jack Lux totaling 70 TB and 22 RBI through 37 hits. Junior Alex Neal really working it on the mound with 60 K’s and just 15 RA through 45 IP.

5.) Grinnell (25-5): The Tigers continue to impress and had strong wins this week over Pella and Knoxville to go 5-0 on the week. Their pitching is still phenomenal with 242 K’s (2nd in 3A) while allowing just 43 ER (also 2nd in 3A). Owen Coffman continued to work his magic with  56 K’s and just a .196 BA against. Junior Brady Steward is right behind allowing a mere .186 average against him combined with 53 strikeouts.

6.) Assumption (19-12): Not their strongest week as they split a series with Davenport Central (11-13) and Bettendorf (7-19) but still worth of remaining in the top-10. Sophomore Roderick Tenamor has really broken out onto the scene and has compiled 30 RBI  across 32 hits.

7.) Wahlert Catholic (23-9): The Golden Eagles had a mixed bag of results this week going 4-3. That included a sweep over Waterloo West, a 9-1 victory over Senior, and included a split with Iowa City Liberty. The down part was being outscored 10-3 against Xavier for the doubleheader sweep. Jake Brosius continues to have a strong season with six home runs and 18 combined extra-base hits.

8.) Webster City (21-1): There’s a lot to be said about suffering just one loss with postseason conversation looming ahead. The Lynx continued their winning ways, now 16 straight games since their last defeat. This week they went a perfect 5-0 with solid victories over St. Edmond and Humboldt as they look to claim another conference crown. CJ Hisler has really had a breakout year offensively with 33 RBI across 31 total hits on the year. Of course, Tyler Olson continues to dominate on the mound with 64 K’s through just 38 innings worth of work. Batters hitting a mere .099 against him.

9.) Fort Madison (21-6): The Bloodhounds had a big surge recently and are winners of 8 of their last 10 games. Despite the doubleheader losses to Burlington, Fort Madison makes the jump in our final rankings of the season.

10.) Storm Lake (21-5): The Tornados remain one of just 15 teams in 3A with 20 wins or more. This week, that included impressive victories over St. Albert, ELC, and a surging Gehlen Catholic squad. Mark Eddie (top-10 in pitcher rankings) still resides in the top-10 of Class 3A with 67 strikeouts with just 3 Earned Runs allowed. Meanwhile, brother Jake Eddie has taken the offensive world by storm with a top-10 batting average in 3A (.506) complimented with 31 RBI.