The Incredible Season Ends At The Top 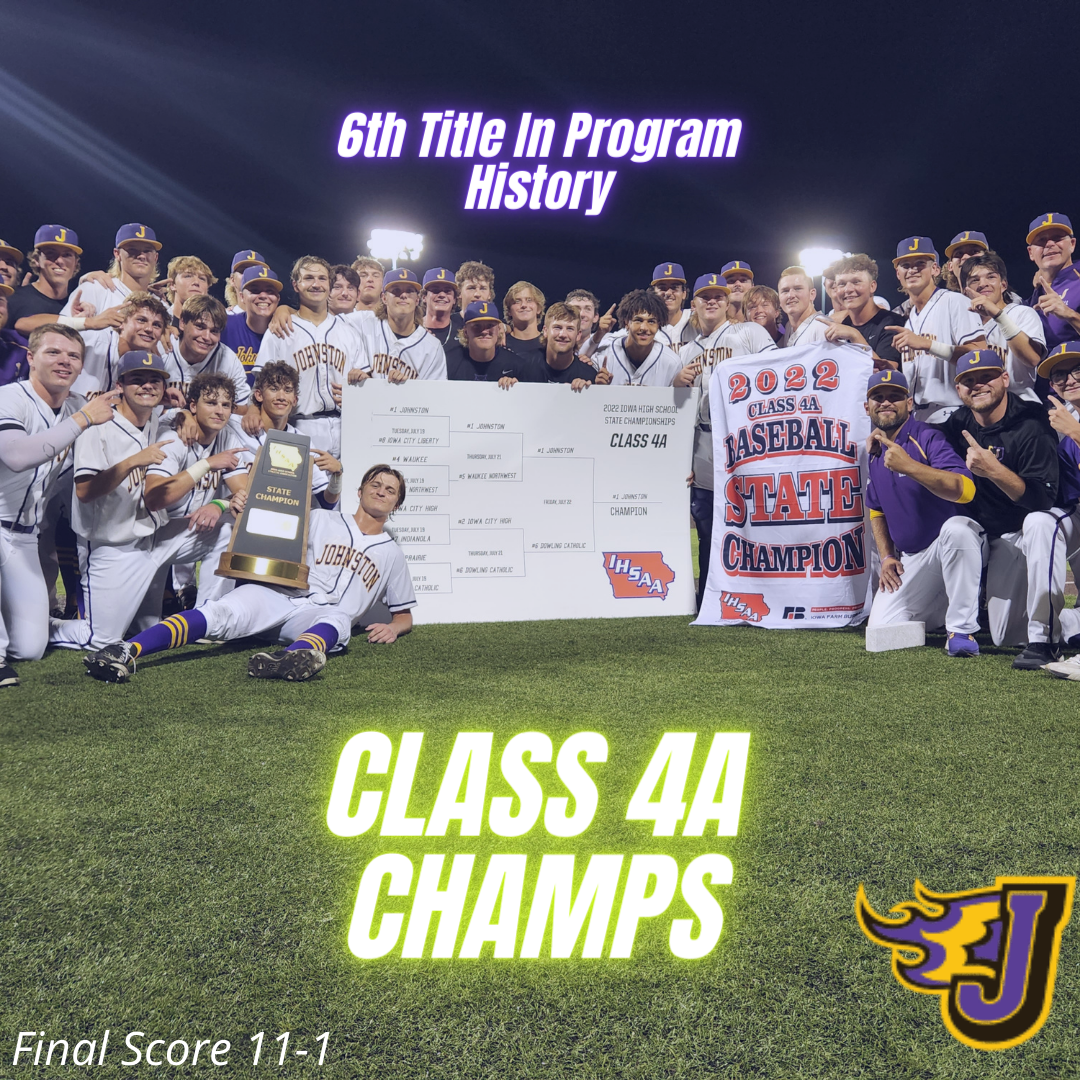 For the Johnston Dragon baseball team, who started the year third in the preseason polls, their long road through 2022 ended in a fashion the rest of the 47 Class 4A teams wished, at the top. As dominating of a regular season as it was, the Dragons somehow took it up a notch in the postseason, capped off with an 11-1 state title game victory over fellow CIML foe Dowling Catholic.

Overall it was right in line with what Johnston had done all year long, outscoring opponents at will and leaving all but a couple of opponents looking at the scoreboard following Dragon win. This postseason started with a 17-0 victory and saw the Dragons outscore postseason opponents 48-9. Across the state tournament along, Johnston outscored foes 28-7. That of course, highlighted by their six inning ten run rule over a Dowling team that averaged 6.3 runs per outing themselves.

As for the title game itself, it was Dowling to strike first as they had all state tournament long, as Luke Sheridan singled in a 1-0 lead. Unfortunately for the Maroons, just like 16 other opponents, watched their hopes at a victory fall off a cliff. That cliff on Friday was a 3 hit, 3 error, 1 walk, and 2 hit by pitch inning. Before fans could blink, the Dragons had a five run lead marking the 20th time this season that Johnston had led a team by five runs or more through three innings. The first seven Dragons reached and from there it was a boat load of support for Johnston hurler Pierce Anderson. Two hits, 2 errors, and one hit by pitch across the very next inning, and the game was really starting to get away with a 9-1 advantage for the Dragons.

Ultimately there was just one inning where Johnston didn’t poke across a hit, but in nearly every inning they sported a runner on base. They didn’t strike any 2-out RBI but Johnston did hit .375 with runners on and hit .833 with runners on third and less than two out. Half of their leadoff batters reached and overall it was as near flawless of an outing as you could get.

In the end, it was the taste of something that the program had been longing for since last season when they got up-ended before the seventh inning or a big loss. There hasn’t been much dissapointment to fuel as motivation for the Dragons this season, so last year’s state title loss filled that role for the most part.

“These guys have been motivated since the end of state last year,” said head coach Michael Barta. “They went back and put in a ton of work and helped create such a strong culture. I love these guys, they deserved it.”

Johnston ended ended up finishing with just four losses on the year, all of which came during double headers. Looking back at the schedule, no loss occurred after June 27th. The overall hitting total equaled out to 11 hits for Johnston, a few of those coming shortly after five Dowling errors on the night. Back to the pitching side of things, Johnston used just five total pitchers with all three starters going four innings or more. For Pierce Anderson, that meant six strong innings with six strikeouts, just two walks, one run, and four hits allowed. Overall, it was a performance on par with what Carter Woollums and Jake Pemble put forth in the first two games at Duane Banks Field.

“I knew I had to go out there and just challenge their hitters,” began Anderson. “It was also about trusting the defense behind me. It was kind of work them in then out and never leave anything over the middle of the plate.”

Anderson did just that end ended up helping to send the Dragons to their sixth all time state tournament title, fourth under head coach Michael Barta. It helped secure the win for the program and one last win for the seniors.

“I’m really happy for these seniors, devoting thousands of hours into our program, just great culture guys,” said Barta. “Credit to their work, you’re only as good as the work you put in. I love all this group, this group is special. Those seniors created that momentum and that energy by wanting to be apart of the game, even if their number 35 on our roster.”

With all that being said, that officially wraps up the season not just for Johnston and Dowling, but for the entire baseball season across 2022. With the dust all settling, as has been the case five times in the past, the Dragons are the last team standing in Class 4A. Congrats to the Drags after what was an unforgettable and fantastic season.