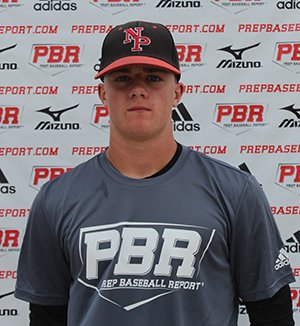 Following a fine 2020 campaign, North Polk High School’s very own Joe Husak has taken the next step in his baseball career with a collegiate commitment.

Announced earlier this morning, the right-handed catcher announced his commitment to play baseball at the next level for South Dakota State University. This comes following a 2020 campaign where Husak hit .333 complete with 19 hits and 11 runs driven in. The junior totaled 23 bases and drew 14 walks within the shortened 2020 campaign.

Husak, ranked fifth overall among 2021 catchers by Prep Baseball Report, became just the third 2021 graduate catcher to make a collegiate commitment. His six foot, 165 pound frame has produced a max exit velocity of 88 mph off the bat with an average distance of 186 feet per hit. The junior has proven himself to be strong from behind the plate as well, boasting a pop-time between 1.88 and 1.98 seconds with an arm strength equating to 84 mph. He had 47 putouts and 18 total assists on the 2020 season.

Husak’s experience also translated to the pitching mound where he produced 51 strikeouts courtesy of a max fastball speed at 89 mph. Those 51 strikeouts led the Comets and his three pitch arsenal helped produce an earned run average of 1.50 while opponents hit just .116 against Husak through 32 innings pitched.

Husak will be joining fellow central Iowa player and 2020 graduate Logan Smith among the new Jackrabbit ranks. He will be joining a South Dakota State baseball program with 22 regular season and 17 Summit League Conference titles under their belts. The Jackrabbits have also compiled 27 NCAA Division One championship appearances, 44 individual national champions, and 516 All-Americans. Recently, South Dakota State recorded a mark of 28-22 overall and a 19-10 conference record.