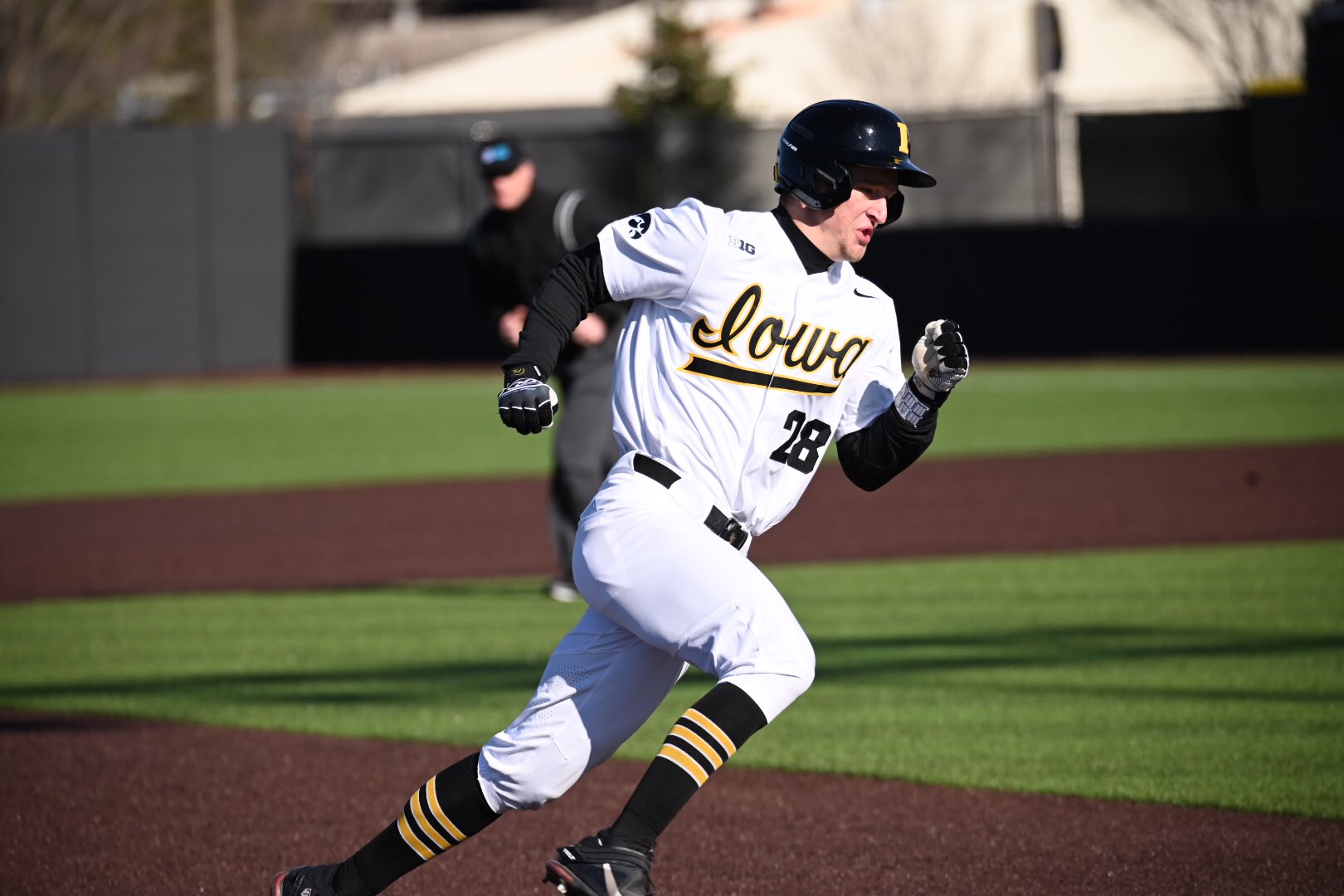 The University of Iowa baseball team was one strike away from completing a doubleheader sweep of Illinois on Saturday at Duane Banks Field, but the Hawkeyes had to settle for a split after falling in extra innings in the night cap.

Iowa won the opening game 4-2 before falling 7-5 in game two in 13 innings. The Hawkeyes are now 16-11 overall and 3-2 in Big Ten play heading in Sunday’s series finale.

Three senior Hawkeye pitchers – Dylan Nedved, Connor Schultz and Ben Beutel — limited the Illini to five hits in a 4-2 series-opening victory. It was Iowa’s third straight and 16th win of the season.

“Dylan wasn’t sharp, but competed and did a great job,” said Heller. “All of us were thinking to get out of there with the mess he put himself a few times with just one run was impressive. He fought through it, buckled down when he needed to and toughed it out.”

Iowa got on the board in the third when redshirt junior Brendan Sher ripped a two-out double to centerfield before scoring on an opposite field RBI single from sophomore Michael Seegers.

The Hawkeyes pushed their lead to 3-0 in the third when redshirt sophomore Peyton Williams walked and scored on redshirt freshman Keaton Anthony’s RBI double to left center. Senior Izaya Fullard followed with an RBI single to right field – his first of the season.

Illinois broke onto the scoreboard in the fifth on a solo home run from Justin Janas, but Sher got the run back in the seventh when he hit a solo home run to center field, stretching the lead to 4-1. It was Sher’s second homer of the season.

The Illini made things interesting in the ninth, putting the first two batters on via an infield single and a walk, forcing Iowa to bring in Beutel with two on and nobody out. Illinois loaded the bases before a Ryan Hampe sacrifice fly plated a run, but Beutel struck out the final two batters looking to end the game.

The Illini took advantage of free bases in the 13th to score the go-ahead runs to even the series with a 7-5 victory.

Ryan Moreman followed with an infield single, pushing the lead to 7-5 heading into the 13th. Joseph Glassey finished off the game, striking out the side to finish off his third inning of work and to secure the win.

“It was a painful loss, but I thought Illinois bullpen pitched really well,” said Heller. “They’re a good team. They’re a veteran offensive team that we held down for the most part.

“There are a lot of positives and negatives from today, but at the end of the day, you have a three or four run lead, you have to finish it off and we have to get it done.”

Iowa jumped out to a 2-0 lead in the second on an Anthony sacrifice fly and a Fullard single. After Illinois got one run back in the sixth, the Hawkeyes pushed its lead to 4-1 in the bottom half.

Anthony belted a solo home run to right field to start the inning before Iowa loaded the bases on three straight singles from Fullard, Anthony Mangano and Petersen. With two outs, freshman Ben Wilmes was hit by a pitch to force in the team’s fourth run.

The wheels fell off for the Hawkeyes after going to the bullpen to replace starter Adam Mazur in the seventh. Mazur allowed one run on three hits and fanned nine in the game, but wasn’t involved in the decision.

Iowa issued a pair of walks to start off the inning before going to the pen in favor of redshirt junior Jared Simpson. The southpaw got a comebacker, but he threw the ball into center field, allowing the first run to score.

The Hawkeyes went to Will Christophersen following a wild pitch and Brandon Comia welcomed him with a two-run double to left field to tie the game at four. Freshman Brody Brecht entered with two on and nobody out and he got out of the inning via a ground out and two strikeouts.

Iowa responded in the bottom half when Williams connected on a solo home run – his sixth of the year – to right field to give the Hawkeyes the 5-4 lead.

Illinois kept battling, getting the leadoff batter on in the ninth against Beutel and moving him to second on a sacrifice bunt. With two-down and two strikes, the Illini tied the game in the top of the ninth on an RBI single from Jacob Campbell to center field.

UP NEXT
The rubber game and series finale will take place Sunday, beginning at 2:05 p.m.