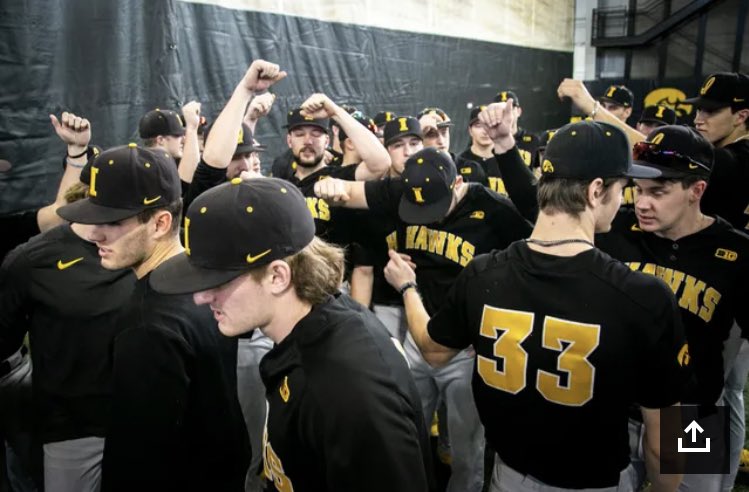 Redshirt sophomore Adam Mazur was dominant, pitching six strong innings and the Hawkeye offense had 15 hits to propel the University of Iowa baseball team to a 12-2 victory over Air Force in its season opener Friday at the Swig & Swine Classic.

Mazur, a transfer from South Dakota State, allowed a first-inning home run (to the short porch in right field) to Falcon preseason All-American Paul Skenes, but that was it. The right-hander retired the final 16 batters he faced and finished the game with nine strikeouts without a walk to notch his first victory as a Hawkeye.

“Adam did what we needed him to do,” said head coach Rick Heller. “He went out and was dominant. He pounded the strike zone and was ahead in the count the whole game. He gave us six strong and we could have went an inning or two more.”

Iowa’s pitching staff allowed one hit in the game and finished with 14 strikeouts (to four walks). Senior Cam Baumann had five strikeouts in two shutout innings and Benjamin DeTaeye and Jacob Henderson got the final three outs in the contest.

“It was battle, our guys worked counts and lost some with strikeouts, but we got Skenes out of the game early,” said Heller. “We also had some timely, clutch hits. We’ll take 12 runs on Opening Day when you face a Golden Spikes candidate.”

After leaving five runners on base in the first three innings, Iowa put together a strong inning in a four-run fourth. Nelson started the inning with a double to right center for the first of six straight Hawkeye hits.

Redshirt sophomore Kyle Huckstorf had an infield RBI single to plate the first run, a double steal made it 2-0 and sophomore Michael Seegers doubled home Iowa’s third run to chase Skenes from the game. Williams then welcomed the Air Force reliever with an RBI single to right field to push the lead to 4-0.

Iowa doubled its lead with a four-run sixth inning. Sophomore Anthony Mangano had a pinch-hit RBI double to start the scoring before redshirt sophomore Ty Snep scored on a wild pitch. edshirt sophomore Brayden Frazier had a two-run single to make it 8-0.

The Hawkeyes notched their third four-run inning in the ninth courtesy of the long ball. Freshman Sam Petersen hit a two-run shot to right field for his first career hit, home run and RBIs and Williams followed with a two-run blast to the short porch in right to make it 12-1.